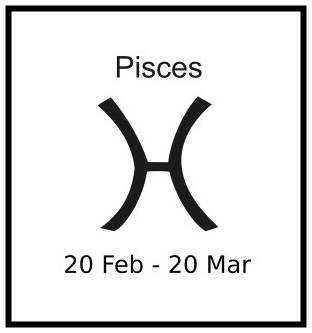 Knowing Pisces characteristics and personality traits can help make it easier to understand anyone who is born between February 20th and March 19th. Their symbol is the pair of fishes, which symbolizes the duality in life. This sign is constantly working to find balance between the two different directions they are being pulled in life.

Pisces are a water sign, which means they are very emotional. They can be very passionate regarding their feelings. This sign is a compassionate one, and they are intuitive about the feelings of others. Their intense feelings can make them very loving and caring for others, and they will often sacrifice everything for the ones they care about. They can also be very giving and generous in helping others.

These intense emotions can sometimes cause problems for the Pisces. Their moods can often seem to change drastically without warning or reason. This is a sign of extremes, which means they can go from extreme joy to extreme sadness if they are not careful. They are prone to feeling guilty for things that may not even be in their control. They can also be overly sensitive to their surroundings and things that happen to them.

Creativity abounds with Pisces signs, and they are often very brilliant and artistic. They love to dream, and so this creativity can fuel great dreams and ideas. They are often successful in the vocal arts, and enjoy singing and music. Their imaginations are quite vivid, which can give them the ability to create many things as well as escape to their dream world rather easily.

It may seem like sometimes the Pisces is detached from reality – constantly dreaming or thinking of something else besides the present. They are great daydreamers, which for some can cause problems in things such as school or doing tasks that do not intrigue them, such as a boring career. They are often very tuned in spiritually.

Money Not a Concern

Pisces signs are not concerned with money like some other signs are. It is not that they do not like money or the things that it can buy them, but rather they see life for being more than just riches or wealth, and so they are not greedy by nature. They will often give to others when they can, and sometimes even when they shouldn’t.

Calm and Laid Back

Pisces have a generally laid back attitude and go with the flow with most things in life – as it is too much of a struggle for them to fight against it. They are generally calm and can handle stressful situations with ease. However, they can get angry easily because of their tendency to change moods quickly – and when they get mad, they get very mad! But, they do not usually stay mad for long.

This sign can sometimes be impulsive, as they tend to change their minds very quickly. What they want one day may not be what they want the next – and don’t be surprised if they suddenly make a drastic change in their lives without warning or notice. Your Pisces friends are the type to call you and say they’ve moved to the other side of the country or started a new career.

However, they can also seem to be indecisive at times as well; getting concrete plans in place can be difficult with them as they are always keeping themselves open to other things that may present themselves.

It is important that Pisces find a direction and purpose in their life early on – otherwise it may be too easy for them to just drift along with life without really getting what they want or need. Popular career choices amongst Pisces include those of the arts, such as singing, acting, dancing, painting, film making, or even graphic design. Because they are compassionate for others, they can also make excellent counselors, nurses, doctors, veterinarians, and other healing professions.

Are there any Pisces characteristics we may have missed? Share them in the comments section below.